Animals aren’t the only ones suffering at the hands of the meat industry; Mother Earth is right there with them. Our planet is in worse condition that ever before. In a time when environmental health seems to be ignored by our current U.S. government, (The secretary of agriculture comes from the biggest chicken-producing state in the country, receiving thousands in campaign contributions from big agribusinesses, and Trump himself still claims global warning to be a myth, pulling us from the Paris agreement last year) it’s critical we start asking what we as consumers can do to reduce our environmental impact and make sustainable choices towards preserving the earth.

Science is consistently proving that what you put on your plate makes a difference, but it can be hard to make the connection between that juicy steak on your plate and the harm that was caused to get it there. How is your diet really affecting the world around you?

Deforestation and Land Use

Livestock are fed mainly corn and soybean meal, which require large amounts of land and water to grow. The average cow in North America consumes between 75 and 300 kg of feed to produce just one kg of protein. A third of the world’s landmass is designated for growing enough livestock feed, and only 8% of agricultural land is used for crops fed directly to humans. The livestock sector uses more space than any other industry. 4/5 of the deforestation in the Amazon is directly linked to cattle ranching because Brazil is the world’s largest beef exporter, offering loans of hundreds of thousands of dollars to expand the industry for growing demand. The land is used to grow feed and make way for pastures and slaughterhouses. It is estimated that rainforests will have completely vanished in 100 years due to these practices. In America alone, 1/3 of U.S. soil is used to raise animals. If we continue to consume meat at the current rate, we will need 42% more land to support the population by 2050; and I think it’s safe to say were already running out of it.

Think of it this way: a quarter-pound burger requires the following resources – 6.7 pounds of grain, 52.5 gallons of water, 74.5 square feet of land, and 1,036 BTU of fossil fuel energy. How much water does one pound of ground beef require? A whopping 1,799 gallons. A third of the world’s fresh water resources are also devoted to raising, producing, and transporting meat. A tremendous amount is needed to grow the grass or feed and supply the animals with water for drinking; plus water is needed for cleaning facilities and use in processing. All that water has to come from somewhere. Lakes and rivers are already being depleted, ground water levels have dropped, and California, the country’s biggest producer of meat and dairy is constantly battling drought. In 20 years, it’s possible that we’ll need up to 24% more water to grow the world’s food, and many of the world’s countries are unable to commit to using more water for their agriculture without sacrificing ecosystems important to other industries, such as fishing. A dairy operation with only 700 cows uses 3.4 million gallons of water EVERY DAY. Reducing our global meat and dairy intake would relieve pressure on resources and ensure a future of clean water.

Factory farming’s biggest impact may be on climate change and the air we are breathing. Scientists and organizations seem to have varying results when it comes to how much pollution and gas admissions are caused by big factory farming, but we know it is at least 14.5%, and some organizations claim it to be upwards of 51%. 400 different gasses are released into the atmosphere by urine and waste from farm animals, including nitrous oxide (causing 65% of world emissions), ammonia (causing roughly 80% of emissions in U.S.), endotoxins, and hydrogen sulfide. It is also known that 65% of world methane emissions come from factory raised cows, and methane traps 100 times more heat in the atmosphere than carbon dioxide. When cows are fed low quality feed that doesn’t digest well, they experience high levels of flatulence and the gas is released into the air, contributing greatly to global warming. In 2017, NASA came forward to reveal that recent studies have shown methane contributes far more to climate change than originally believed by scientists. With the vast majority of land being used to raise livestock, its a simple truth that we are almost constantly breathing in contaminants from cow farts and excrement. To top it off, when the animal waste finally breaks down, it forms ammonia gas. When the gas breeds bacteria and combines with other pollutants, the result is nitric acid. The nitric acid builds up in the atmosphere and is returned to us as acid rain, harming ecosystems and human health. Avian and Swine Flu can also be transmitted through the air due to poor farm conditions. 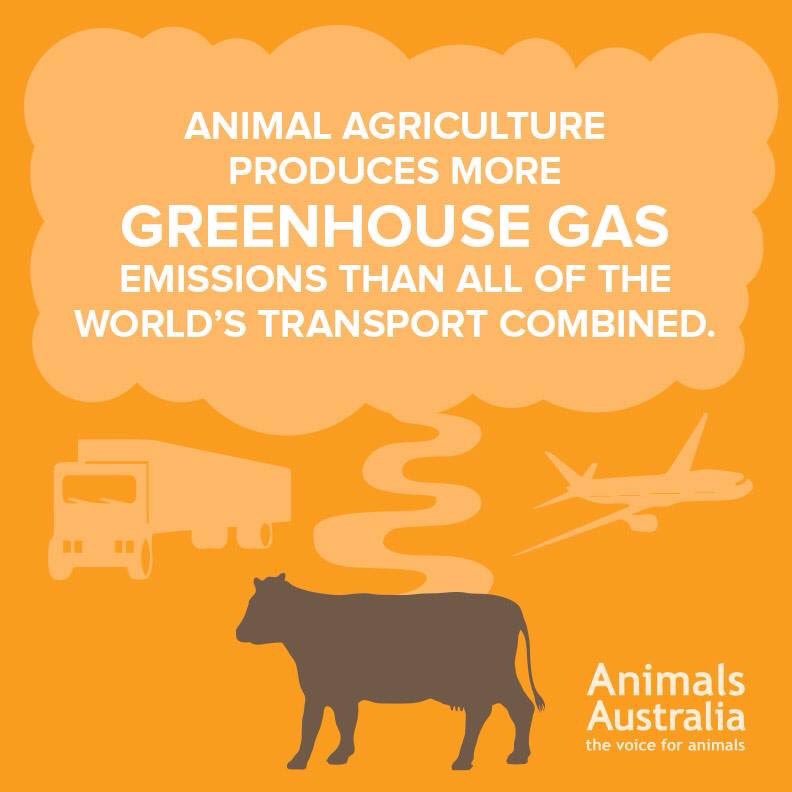 Just off of the coast of Louisiana, in the Gulf of Mexico, we are seeing the largest oceanic dead zone ever recorded. 8,776 square feet of marine life is being suffocated by nutrient run off from agricultural farms. Toxins from manure and fertilizer are causing hypoxia, the term for when algal blooms in the water destroy oxygen levels. Life in these zones must relocate to cleaner water or face death. The EPA has said that 100,000 miles of rivers and streams, 2.5 million acres of lakes and ponds, and 800 miles of bays have very poor water quality due to this nutrient pollution as well.

Growing mass quantities of food for cattle doesn’t only require large amounts of land and water, but of fertilizer and nutrients as well. It is predicted that 167 million pounds of pesticides and 17 billion pounds of nitrogen fertilizer are used across 149 million acres of land in order to grow the corn and soybean meal needed. Excess phosphorus and nitrogen from that fertilizer penetrate the ground and create run off when it rains, entering streams and rivers directly connected to the Gulf of Mexico and elsewhere. With the rate of meat consumption increasing, so is the rate of production. The industrial methods of factory farming have sped up the rate of soil erosion to 10-40 times faster than the rate of soil renewal. Some of the biggest company perpetrators include Smithfield and Tyson Foods. If we reduce the need for meat and dairy products and purchase them from more earth-friendly dealers, we can help slow contamination and pollution by considering supply and demand.

In conclusion, it’s easy to see how factory farming is harming the environment more heavily and in more ways than any other industry. According to the Netherlands’ Environmental Agency, if the world went vegetarian, “there would be a 24% reduction in methane, 17% reduction in CO2 emissions, and 21% in Nitrous Oxide. The 8% of the water supply used to grow feed would be used to relieve pressure on water resources worldwide, and pasture areas would be reduced by 80%.” Cornell University has also stated we could feed 800 million people with the grain we used to feed livestock. That’s right ladies and gentlemen; the fate of this gorgeous, magnificent Earth is literally lying on your plate. If we want to end global warming and world hunger, increase the amount of free space and clean water, breathe fresher air and liberate billions of tortured animals, all we need to do is reconsider what we are eating.